It gave me the best Bluetooth listening experience I’ve had on anything. Now, if you’re familiar with these headphones at all, the first thing you’re probably thinking how come you can classify this as Bluetooth headphone.

And you’re right Ultrasone decided to come up with the Bluetooth adapter, and it’s made to be the same size as the ear cup. It just plugs right into the headphone jack.

It’s made to where it looks like it’s not even there. It’s just this simple little add-on, but it’s not cheap. The add-on cost around $170.

So when you add that to the price of the headphones that are already around $500, we’re talking a total of $670, so that is the most expensive Bluetooth headphone setup that I’ve tested.

If you’re somebody in the audiophile world of headphones, you know that headphones can cost two to three thousand dollars.

It is a deal to getting these headphones, and getting the ability to use these Bluetooth for under $700 is a deal in an audiophile world. 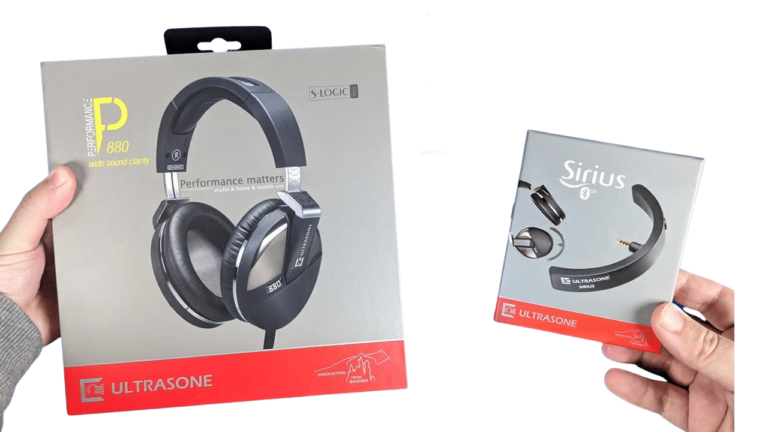 What you get inside the box and see why I think with this package all together, it’s worth the $670 price tag so let’s go ahead and start with the adapter itself.

Now it just simply plugs into the headphone jack, and it’s giving you Aptx playback capabilities. It allows you to have these buttons on the outside. You have your power button, play, pause, and being able to skip your tracks forward, going backward, and even volume control all right there on the outside of this adapter.

Now along with the Bluetooth adapter inside the box, you also get a proprietary charging cable, and the expected battery life is between 8 to 12 hours, so it depends on how you’re going to use these like sound percentage and other factors.

That is what you get inside the box, so now let’s move over to checking out the headphones. These are using the S-logic plus technology, which basically is a way that Ultrasone has designed the audio.

Instead of going straight into your ear canal, it goes more to the top and around your ears, which gives you a 3D effect.

And in my opinion, what it’s doing is it’s allowing these closed back headphones to sound a lot like an open-back pair of headphones. It just gives you a lot more space in the audio, and I think that’s what’s different about the Ultrasone headphones compared to a lot of other ones on the market.

Most of them are having it where the drivers are going straight into your ear.

Now, as far as from a design standpoint, if you pick these up and you look at them, they honestly don’t look like much. They look like pretty much every other pair of Ultrasone headphones.

That I’ve seen out there, it’s straightforward. The build is a lot of plastic, which given the price tag, I would have liked to have seen a little bit more metal down around the ear cups, but all of that is plastic.

But the headband itself is made out of metal, so that is going to be the part that you’re extending and bending the most, so that is definitely a plus.

They went with metal there. I found these to be very comfortable because they’re lightweight. There is a little bit of padding on the headband, not as much as I would like. I did notice that the headphones themselves do have a pretty tight clamping force.

I did notice that after wearing these for a while, it does loosen up, and it does get more comfortable, so don’t give up on them right out of the box.

Now, as far as the ear cups go, they use protein leather. It has memory foam inside, but a huge plus is they also include a set of velour ear pads inside the box, so if you do prefer the velour ear pads, that does give you a little more breathability.

If you’re going to be using these for more extended periods, you might prefer the velour. I didn’t find that the protein leather got warm.

Now other things that they’ve included are two different types of cables. Both of these have 3.5mm plug-ins on one end, and then on the other, they have a proprietary plug-in that’s basically like a twist and lock where you put them into the headphones, you turn and lock them.

They don’t easily pull out now; one you can tell is for portable use because it’s a shorter cable with a microphone on the cable itself, where the other cable is much longer, and you can tell it is more for at-home use.

Where you would plug it into an amp and sitting in front of your computer or maybe even plugged into like your home receiver, now they also have included a quarter inch adapter so that you can use them in most amps, so it is nice that you have both of these options. All are included inside the box.

I use these is with the Bluetooth adapter. At times, I did find myself using these with my amp sitting at my pc; both are great experiences, but we’ll talk about that when we talk about the sound and then as far as the case.

The case in here is a soft carrying case. It’s not going to protect your headphones that much, so it’s nice that they’ve included a case, but I still would have preferred to have a hard case. 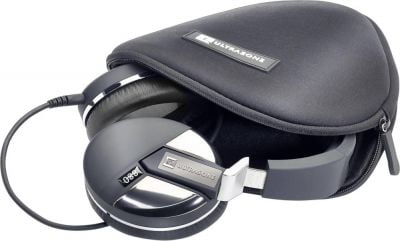 Obviously, if you’re going to use these with an amp, it will depend on the amp you’re using.

It is a detail oriented headphone. It’s not a flat or studio reference style headphone, so if you are looking for that, I don’t recommend them for that, and that’s mainly because these do have a little bit of style when it comes to the audio the bass you can tell is boosted.

It’s not sloppy; it still is pretty tight and pretty accurate, but you can still tell that it’s boosted the same thing with the treble.

I felt like there’s such a focus on getting a lot of details out of these that if you’re going to listen to them loud, you might even think they sound a little harsh.

I think it balances out nicely. The treble is nice and clean. The bass is tight and punchy, so when you mix punchy bass and bright treble.

It gives you a pretty dynamic sound, which is far from being flat or reference style headphones now as far as the mids go.

I think they did an excellent job here; mids always sounded natural. It didn’t sound like it was too much in your face. It never got lost in the mix.

So, it’s not something that took a backseat to the punchy bass or the bright treble. It really had a nice balance to it, and again the sound stage and the sound imaging are excellent on these.

And especially mixed with the Bluetooth adapter, but this could easily be a pair of headphones that you buy. that one will last you for a long time. You can use them for listening to anything.

Plug these into an amp will bring up many subtle things, or if you want to slap the Bluetooth adapter on them and get a very similar sound experience.

But just on the go being able to move around, I was impressed with how close the Bluetooth adapter sounded to plugging these into an amp.

The treble toned down a little bit, but not much. In my opinion, the mids still stayed the same mids are fantastic on these headphones, so it always sounded natural, and overall, it’s just an excellent sound.

If you’re going to plug them just straight into a phone or a tablet without an amp, I still think that you get enough volume out of that.

And I don’t feel like they lack either way that you choose to use them.

The only cons that I have are that the Bluetooth adapter is costly, and I wish it had a hard case.

That way, I would feel better about throwing these in my bag, which’s a pricey investment to have in a soft carrying case.

Overall, this is probably the best listening experience that you can get on a Bluetooth pair of headphones.

Do these justify the premium price tag?