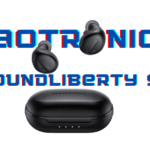 Before we really get into this review, I want to point out the big issue with the Taotronics brand. They name their products in a less desirable way to the consumers.

They can easily not recognize the model they want or are confused with the other models. These numberings have no consistency in them and not desirable or brandable in my point of view.

Checking out the Taotronics Soundliberty 94s and the reason I wanted to check these out specifically is that they have hybrid active noise cancelling. Their retail price is around $60.

And, right now on Amazon, with their coupons and a discount, you can pick it up for only $47 almost 20% discount from the retail price , so for under 50 bucks, you’re able to get hybrid active noise cancelling

And you’re also able to get an ambient mode, which is vital to a lot of people, so I figured we’d check out some of the other features and what you get inside the box and see if it’s actually worth the $50 price tag

As far as what you’re getting inside the box, you are getting the usual small, medium, and large silicone ear tips. The charging cable they’ve included a USB Type C cable.

Checking out the earbuds’ case, I noticed that the case resembles the case of the galaxy buds plus quite a bit. It is a little bit larger than that case.

But this is still a small compact case. It’s easy to throw in your pocket on the back. You can see the USB Type C input for charging, and then around on the front, and you have four indicator lights that way, you can kind of gauge how much battery life is left on the case.

Now moving over to check out the earbuds, I want to say that this is one of the most comfortable pair of earbuds that I’ve used because of how they groove the interior design. It just kind of fits my ear canal perfectly.

It didn’t move around, and I found that this was a pair that I could use most of the day and not have any discomfort. 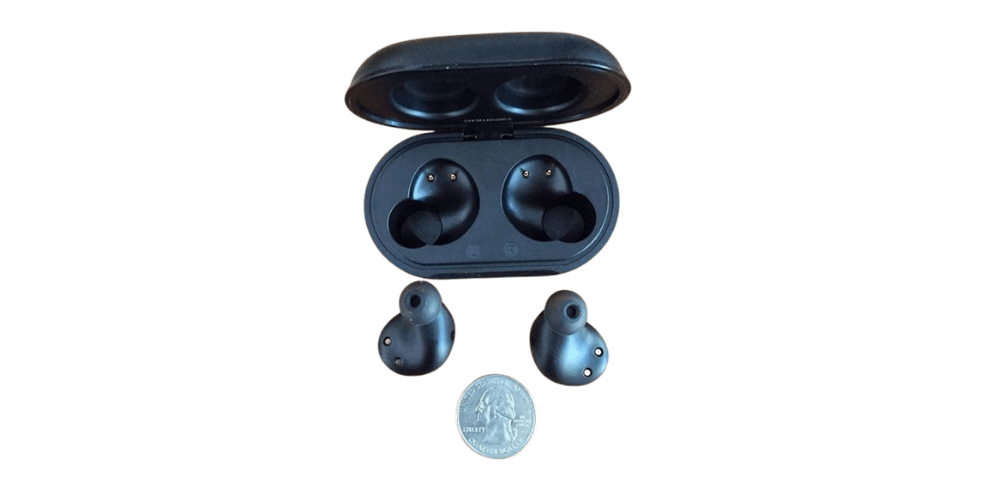 So I want to start with the fact that these are using a 9.2 millimeter dynamic driver. The dynamic driver in these is definitely pushing a lot of low ends.

As far as the technology goes, it is using Bluetooth 5.1. They have AAC and SBC playback, and I didn’t have any issues regarding dropouts or connection issues. Still, I did have some pairing issues initially.

It just didn’t show up on my list of devices to connect. I pulled them out of the case. I had to turn them off, turning them back on. I had to do this several times, and eventually, it did show up, and once I connected, I didn’t have any issues. It is just kind of auto-connected from there.

But I did want to point out that it didn’t just work right out of the box the way it should have. As far as the IP rating on these, they do come in rated at IPX5, so this will not be a pair that you can submerge into the water. Still, it will be a pair that you can use while you’re running or going to the gym; you don’t have to worry about sweating.

Or if it starts to rain, it is nice to know that you can use them that way.

Whoever likes to use your earbuds individually, you’ll be happy to know that you can use either the left or the right.

Now, as far as the controls on here, I’m happy to say that you have control over everything.

You can also turn the noise canceling on or off and then on the other ear. You can turn your ambient mode on, and the ambient mode in here is actually pretty decent.

So it’s just picking up the air, and it just has this like constant hiss type sound, so although you can hear your surroundings clearly, it is kind of annoying that you do have that sound while using these

But with the noise canceling turned off, the bass is booming. You can tell it’s even kind of like digitally enhanced in a way. It kind of sounds artificial at some times.

Many people are going to like this, mostly if you listen to a lot of mainstream music.

But when you get into genres like rock and metal, that bass, for some reason, just kind of rolls over the mids and the highs

It starts to sound muddy; it pulls vocals down a little bit, and then it just pulls the sparkle that the treble has on these because I noticed with pop and hip hop and even like easy listening style genres the treble was nice and clean it just kind of had this nice sparkle to it

The mids on these sounded good. I had no issues with male or female vocalists again. It just kind of depended on what genre I was listening to because listening to pop and listening to metal had two completely different sound signatures.

Now, as far as the sound stage and the sound imaging, it’s not a very open sounding earbud because of that boomy bass.

It makes me feel like I’m more in a medium-sized room, but luckily I didn’t have any issues telling where sounds were coming from.

The only problem was they didn’t sound very spacious didn’t sound very open, so you just kind of felt like you were closed in a little bit more. Again, this will be fun, with specific genres going to ruin some of the others.

And I want to go ahead and say that if you are buying these specifically for the noise canceling.

There is not much of a difference between the noise canceling being on and being off. You can tell that it starts to try to cut out on a little bit of the low end noises.

So if you have air conditioner units or flying on a plane, it’s going to try to block out those low rumble type noises. Still, everything else comes through just as clear as if you’re using these with the noise canceling off.

So I would just recommend using these with the noise canceling off unless you’re traveling or in situations where you’re trying to block out those engine noises.

The battery life on these are okay. If you’re going to use these with the noise canceling turned on, you’re going to get around five hours on the earbuds with around 20 hours using the case

The microphones on here, I think this is an area where they did a decent job. I think if you’re looking for an inexpensive pair to be able to take phone calls while you’re at work or while you’re out and about, I don’t think a lot of people will have any complaints

I think overall, it does a pretty decent job. I feel like it picks up my voice cleanly.

My overall conclusion is you have to go back and look at the price you’re getting active noise canceling that can block out lower rumble type noises. You are getting a pretty dynamic sound depending on what genre you’re listening to.

You’re getting decent battery life. Being able to pick these up for $50 is a nice plus, but I do have some cons that I wish Taotronics will listen to.

I was almost immediately turned off when I was having the pairing issues. At first, I wish that the case had either fast charge or Qi wireless charging, and then my big complaint about these is the ANC is just not that adequate. It’s just not blocking out as much of my surroundings.

In my opinion, those are better options, and they are around the same price.

Check out our popular reviews here. 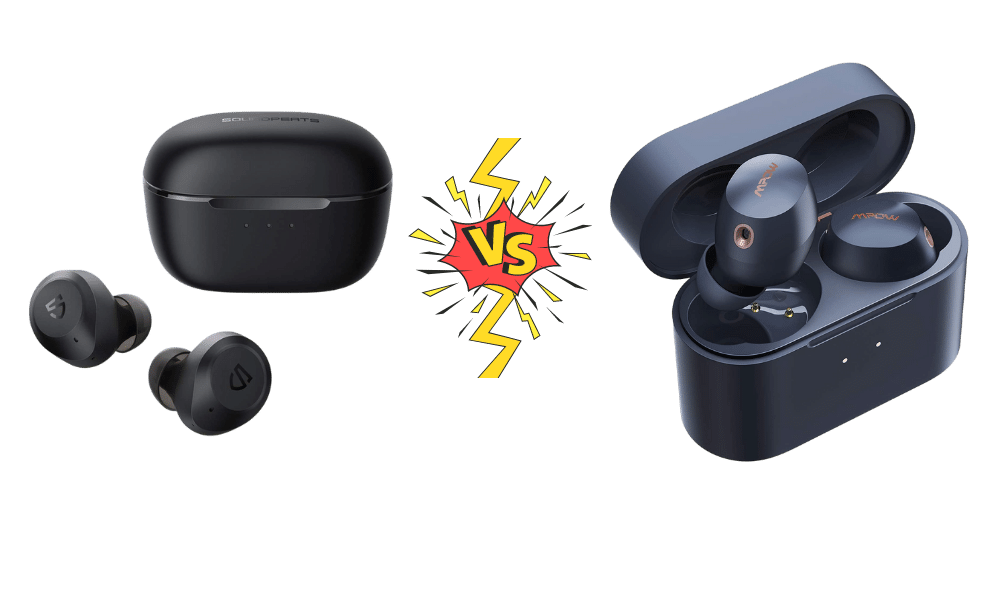 Soundpeats T2 is clearly beats the Taotronics Soundliberty 94 in Sound Quality and ANC performance which is main highlight of the both of these True wireless earbuds brand.

The energetic sound and super strong deep bass of Soundpeats T2 just beats the Taotronics dull bass. If you are a basshead you shouldn’s have a second thought Soundpeats T2 is your earbud.