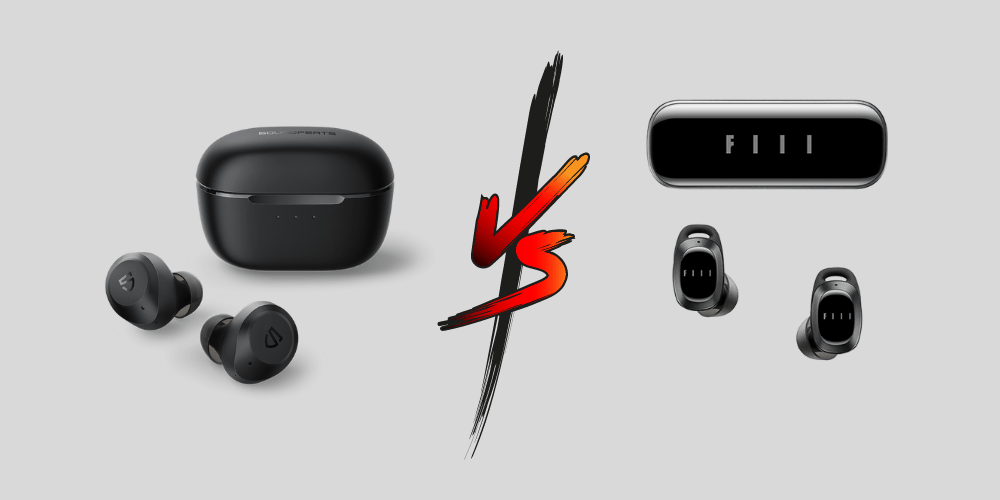 Hey Lovely Peoples, Hi, Let’s check out Soundpeats T2 vs FIIl T1 Pro comparison. We’ll go through the most important differences between the two, so you can decide which one suits your needs better 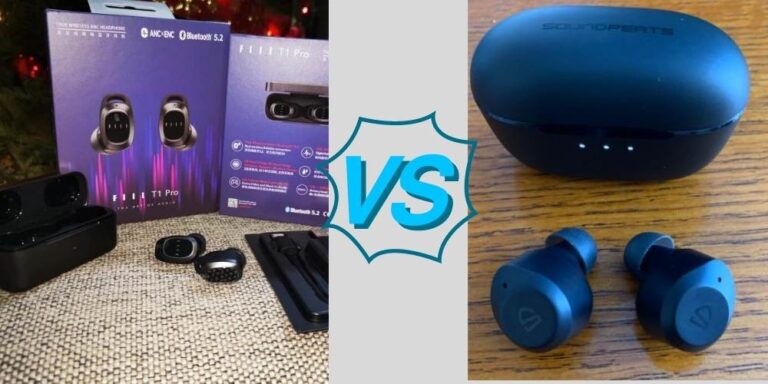 Let’s get into the most important aspect, the sound quality.

I should make it clear from the get go that the Soundpeats T2 does not hold the candle when you compare it to the FIIL T1 Pro, you’ll see why very soon, but do I hate listening with Soundpeats 2 absolutely no It is one of the excellent earbuds I reviewed.

Soundpeats T2 well couldn’t be farther from the truth despite having a pretty large 12 millimeter driver.

This is still the Soundpeats sound signature that we all know and love. It’s a balanced sound that shows the warmer side of vocals while giving you plenty of bass power without overwhelming one side or another.

It’s great to compare it to anything else, but you can clearly separate instruments and vocals better on the FIIL T1 Pro than with the Soundpeats T2. The bass isn’t as controlled and detailed.

I feel like the low mids bleed into the upper mids a little, and the treble gets a little shrill sometimes, which defeats the purpose of a warmer sound.

Keep in mind that on the FIIL, every symbol crashes hurts too, but it’s a satisfying kind of crash. You know this is true for most genres that you’ll be listening to in general.

FIIL gives you better separation and sound stage while also presenting vocals more prominently. So it got the center stage with more details, too, in my opinion.

For sound quality, straight out of the box, the FIIL T1 Pro is undoubtedly the winner here, but it doesn’t stop there.

The Soundpeats app does not support the T2 here, and if you want to tune it, your only option is to use a third-party app like “power amp” on android. This is an extra hassle compared to the FIIL T1 Pro, which has its own app called FIIL plus.

You can find great sounding built-in EQs there or even tune your own.

The settings will be stored inside the earbuds, so they’ll carry over no matter what phones it’s paired to.

I’ve said versatility is one of FIIL T1 Pro’s strong selling points with base EQ. The driver inside is capable of giving you a significant bass boost without sacrificing unclarity and a treble.

EQ really gives that extra airiness in the sound, which makes it great for listening to acoustic songs, and yeah, that said, I gotta give the winner to the FIIL T1 Pro in this round.

as well now moving on to build quality starting with the earbuds the Soundpeats is a no-frills design that looks decent.

It fits well it doesn’t hurt when worn for hours my only complaint here would be the thick profile that sticks out quite a bit when worn.

Compare that to the FIIL that comes with a slew of different ear tip sizes they’re oval shaped so they form a better passive noise isolation and it’s got a couple of earphone attachments as well making it a great companion for exercises.

Most importantly though it’s flush to the ear.

both earbuds has done a great job here and i could say the same with the charging case.

Edge here, though because it’s still smaller, it looks better, in my opinion.

It supports wireless charging, and it’s still got a slightly bigger battery than the Soundpeats here, providing three and a half more charges instead of two.

Checking of battery life, I think it’s natural to expect the Soundpeats to last longer as it’s got a thicker build here, and actually, in my testing at 50% volume with ANC off, it reached more than 11 hours which is just awesome.

And with the FIIL T1 Pro under the same condition, each earbud will last up to nine hours which is equally impressive for something this small, and the numbers will drop when you turn ANC on.

But honestly speaking, both of these exceeds most people’s typical listening session already, and the whole package will last about a week before you need to charge it.

So there’s nothing to worry about here. Both do it really well, and I want to tell you that while you’re paying 10 to 15 dollars more with the FIIL T1 Pro, you’re definitely getting more features than the Soundpeats.

you can’t download the app unless you have a chinese apple id so My Readers exclusive tip is borrow friends or someones android phone download the app turn full controls on and customize the earbuds to your liking then afterwards you can just delete the app.

It doesn’t require you to create an id and so far i haven’t seen anything suspicious so it should be safe that way.

Now with full controls on as you can see here the right earbud is used to skip tracks the left earbud is for controlling volume and you can customize left and right hold to either change Active Noise Canceling modes or call voice assistant.

The touch sensitivity is great it’s customizable in the app and there’s a wear detection feature that uses a capacitive touch sensor which works but it’s a bit slow so.

If you don’t like it you can turn it off as for the Soundpeats T2 you can’t customize anything due to the lack of app support but if you know Soundpeats they always give you complete controls over everything.

As you can see right here the only thing missing now is previous track because it’s used for switching ANC modes and as far as the experience goes i’ve got no complaint for the sensitivity and responsiveness.

The one thing that i want to complain though is the fact that these earbuds always default to ANC off every time you take it out of the case then if you want to turn on Active Noise Canceling you need to get past transparency mode first before finally turning on the anc this just doesn’t make sense.

Fortunately, it only takes one a half second to change mode so it’s not too infuriating and when changing modes you can still hear your music playing a little at the background which i appreciate. Although the volume changes are still pretty sudden.

Comparing this to the FIIL T1 Pro that remembers your last use setting even after you put it back into the case. You always use ANC on you won’t even need to touch anything every time you take it out of the case it’ll be ANC on, then when you hold to change the ANC modes it goes from anc off straight to anc on

Finally transparency mode also there won’t be any interruption to your music when changing between these modes you’ll only hear a little voice prompt telling you whether it’s in changing mode.

The FIIL is just way more practical to use if you don’t totally hate Chinese voice prompts.

Let’s talk about the actual quality of anc.

In Transparency mode, and it’s finally time for the Soundpeats T2 to shine, yes, the anc blows  FIIL T1 Pros out of the water, blocking more noise up to the mid-range region without adding any pressure hissing or sound quality changes.

This alone, in my opinion, justifies each and every one of my complaint i’ve said before you cannot find anything else at 60 bucks with ANC better than Sounpeats T2. In a seperate article we have given a detailed review on Soundpeats T2 Check out the article

The only good thing about the FIIL T1 Pro in terms of ANC is ear tip seals very well. The passive isolation makes up for the weak, so in real life use, it’s still pretty acceptable.

It’s definitely a side dish instead of the main dish on a Soundpeats T2 as for the transparency mode. Both of these sounds clean without any significant hissing, but I gotta say the Sounpeats T2 wins the comparison any day.

And of course, it’s very impressive coming from $60 earbuds. Still, it keeps in mind it is not perfect because it’s using the mic just below the touch sensor sometimes, you might accidentally tap on it, and at that instant, you’ll hear a pretty loud and unpleasant rubbing noise coming through.

FIIL avoids this issue by using the mic above the touch sensor, and also the gain isn’t that much, so it doesn’t make as loud and annoying, rubbing noise as the Sounpeats here, but I think it’s more of a balancing act here because if you put the gain higher.

You can hear everything around you clearer, and so I gotta say the 1more Comfobuds pro hits the best compromise for the transparency mode here.

Soundpeats has really nailed it when it comes to ANC and transparency mode here.

This is their first try and it’s already second to none for the price but the experience can still use a lot of improvements especially because it defaults to ANC off every time, and the time it takes to go through transparency first before ANC on adds up but if you can’t accept that and you don’t need the better sound quality or features the Soundpeats T2 will be a great purchase and it’s cheaper too so i think you’ll love it

Otherwise if you want the best sound and the most feature you can get for the price you can’t go wrong with the FIIL T1 Pro. There is an issue for Europe and the USA as FIIL T1 Pro do not available here easily still you can check Earfun Free Pro Which is the same wireless earbud under the different brand name.

Hope this article helps you to choose your next earbuds.