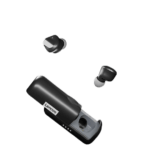 Everything on this is very tiny, and actually, the price right now on these are very tiny as well because they come in retailing around $50, but on Amazon, there is a $25 off coupon if you use our link, which drops the price down by 50% so you can pick these up around $25

Inside the box, it does come with the usual small, medium, and large silicone ear tips, and I think it’s very important to get the right fit because this is a pair that’s so small you want to make sure that they’re secure in your ear now as far as the charging cable it comes with a USB Type-C cable

Now moving over to checking out the case on these again, I can’t stress how tiny this is. It’s easily pocketable, and it’s easy to carry around and forget that it’s there.

I like that it has a sliding door over the top instead of the standard clamshell design. Now on the back, you can see the USB Type-C input for charging, and then around on the front, you have your four indicator lights that way, you can kind of gauge how much battery life is left on the case

Looking at the earbuds again, this is a very tiny earbud, but I do like the design that Lenovo went with here. It has a larger flat surface because these do use touch controls, and it just makes it easier to tap

Start with the fact that these have Bluetooth 5.0 and they are an excellent pair of earbuds for media, I didn’t notice any lag with movies and videos.

There was only a slight lag when it came to gaming, and I think that’s very impressive because many earbuds, especially budget earbuds, tend to lag when it comes to media, and I was really impressed with how well these kept up

The IP rating they do come in rated at IPX5, so if you’re looking for a pair to use at the gym or use outside while you’re running, it’s going to be fine against rain or sweat, but this is still not a pair that you’re going to be able to submerge into water

You can use either the left or the right earbud individually if you wish to use only one earbud. 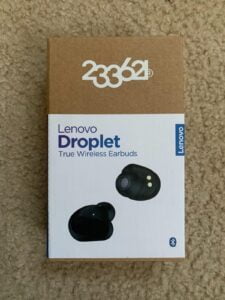 Now, this is some of the smallest battery life that I’ve seen on a pair of earbuds, so you kind of have to pick if it’s worth that trade-off to you.

I don’t think many people use their earbuds for more than four hours at a time for many; it may not be that big a deal

Sound on these is a very typical sound uh what I mean by that is it has the typical u-shaped sound signature, which means there’s much focus on the bass and a lot of focus on the treble while leaving the mids kind of in a safe area where it doesn’t get lost in the mix

But it’s not too upfront either, so if you’re somebody that likes a pretty dynamic sound, I think they did a nice job of keeping the bass controlled but still picking up even sub-bass very well

I felt like it had plenty of punch, which was kind of surprising because of the earbud being as small as it is. The treble brought out much detail again. It balanced out nicely with the bass, and that’s with listening to pretty much any genre I even felt like with metal or other genres where there’s a lot going on

It never got muddy or congested, so I was really surprised they were able to pull that off

Now, as far as the sound stage and the sound imaging, it never made me feel like I was closed in because the bass is not overpowering. I felt like I was in a larger room, so the sound had a little bit of space to it.

I had no issues with telling where instruments were coming from, and again, because of the price tag and the size, that’s very impressive now

The touch control has control over everything except the volume. Now I wish this is something that Lenovo would have had on here. You only have the ability to play pause, skip your track forward, and go backwards.

If you want to control the volume, you either have to call your smart assistant or pull out your phone, and for me, I find that to be inconvenient

Now, as far as you guys that like to use your earbuds individually, you’ll be happy to know that you can use either the left or the right, and then as far as

The microphones on here this is an area I think they did a pretty decent job with, so if you are somebody that likes to use your earbuds for phone calls, I think you’ll be more than happy with these earbuds

It does a really good job of picking up my voice. I think it picks up bass tones pretty nicely.

Overall you can expect a decent call experience from these

As far as my cons with these, it’s really hard to nitpick a pair that you can pick up for $25 bucks, but I will say I wish I had a little bit more battery life, and I really wish they had volume controls that’s the only thing that I would change on these

But again, most people don’t use their earbuds for more than four hours at a time except me

I don’t think many people will have complaints, especially at this price

Let us know your experience with the Lenovo Droplet below in the comments
Our Rating
 3.83/5