Hey Lovely Peoples, I think we all know by now that fiil is killing it when it comes to budget true wireless earbuds but which of their buds gives most for the bucks. the t1x,  t1xs, or the brand new t1 pro what are the differences between them and which one you should buy. We will be going to check these compete Fiil T1 pro vs Fill T1X vs Fiil T1XS in these criteria.

If we look at these designs and build, the older Fiil T1X comes in the last place.

Not just because they’re larger but also because they feature a reasonably average zero frills case with no notable finish or design.

They’re still very impressive at the $40 price point but certainly not the best of all three here.

However, the Fiil T1X buds are actually on par with the other two options.

In terms of build and design being much similar, the Fiil T1XS and Fiil T1 Pro feature an identical design for the case.

Apart from the finish, the T1XS have that glossy Airpod like finish, and the t1 pro feature a matte metallic look.

I personally prefer both are insanely compact. Still, the earbuds on the Fiil T1 pro’s are noticeably more compact, meaning they just about edged the win here.

The T1X and T1XS buds, on the other hand, are actually pretty much identical in size.

But it has to be said that the original T1X does have a clear advantage in IP rating. They include an IP65 rating making them water-resistant and dust resistant too. The other two contenders here have an IPX5 rating, so they’re not dust resistant at all, so you might want to bear that in mind.

Remember, the case is larger, so they should reasonably be the overall winners here.

However, the T1XS also has 6 hours of earbuds battery life and 24 hours Case battery life.

Overall, which is pretty insane when you factor in their considerable reduction in size.

But what about the Fiil T1 Pro? You will have seven hours of earbuds battery life and 32 hours of case battery life.

Of course, these figures will reduce with ANC on.

Still, it is pretty crazy, considering the case is identical to the Fiil T1XS in size. The earbuds are the smallest of all three options.

Best Over Ear Headphones For Working Out

About fit and comfort, since all three buds have wingtips, I rate them highly for a secure fit and recommend all three of them for the most intensive workouts.

I could also get a great seal on all three buds with no problems, so that’s a three-way tie, right? Well, not entirely when it comes to comfort.

The Fiil T1 Pros is the clear winner here. Their compact size means far less pressure in your ears.

Meaning reduced ear fatigue compared to the Fiil T1X and XS, but that’s not all the T1 Pro feature an oval shaped driver, which is far more comfortable for me than the round drivers of the other two options

so it’s yet another clear win for the T1 Pros here, with the T1X and T1XS again tied in second place

But what about Mic quality?

We’ve compared it to the other two with Fiil T1X so let’s go over to the T1XS. The Fiil T1XS is there any noticeable improvement.

Background noise in the T1XS sounded pretty good. I have to say all three mics impressed me here, and it’s safe to say that I’ve heard a lot worse in other budget true wireless earbuds at the same price.

The Fiil T1X was slightly quieter than the other two. However, I couldn’t hear any discernible difference between the Fiil T1XS and T1 Pros.

In terms of overall clarity, ties Fiil T1XS  and T1 Pro in first place for mic quality, with the T1x very close behind.

Well, about functionality and usability, and it’s a straight win again for the Fiil T1 Pro, let

The T1 Pros have Bluetooth 5.2 wireless charging and active noise cancellation. Which makes this a very easy win.

However, all three do have app support, including access to equalizer presets.

This is a lot more than I can say for 99 of other buds out there under $100 theT1XS and Pros also have a low latency mode, too isn’t this enough?

This is particularly helpful when smartphone gaming, so that’s a nice little addition considering we only have AAC and SBC audio codecs.

But despite not having the support of Apt-X, audiovisual lag when connected to my laptop was mixed and non-existent across all three models.

But there is one minor issue here.

All the voice prompts in Fiil T1 pro are in Chinese also. The Fiil app on app stores doesn’t support the T1 pros yet.

I was able to get around that by installing a Chinese app store on android.

Then download their version of the fiil app. which does support the t1 pros; however, it’s again all in Chinese.

But I’m still going to give this round to the T1 Pros despite the language barrier.

You’re not going to have to worry about Chinese voice prompts, Chinese apps, and indeed, the app will support the Fiil T1 pros eventually with the addition of a low latency mode.

The Fiil T1XS come in second place and the T1X in third despite still offering more functionality than all budget true wireless earbuds under $50.

let’s talk sound quality; the sound signature on the Fiil  T1X has always punched well above its price point with one of the best bass boosted sound signatures I’ve heard under 50 dollars; however, as I’ve mentioned before

The overall quality is marred a little by audio hiss and a quiet yet.

Still audible high-frequency beeping sound in the left earbud, the Fiil T1XS improved on this issue quite significantly, reducing the sound of that high-pitched beep to the point where it’s almost inaudible

But theT1XS unfortunately still retains the same white noise level as the T1X, which kicks in just after hitting play and a few seconds after pausing.

The sound quality on the Fiil T1 Pro is mind-blowing for $70.

For once, we’re actually getting a more neutral sound signature in a pair of budget true wireless earbuds, something I have never come across so far. Of course, bass heads needn’t worry because you can always use the bass preset in the app.

If you want more of a bass heavy experience, the white noise is also significantly reduced in the pros though still just about the present.

If you listen for it, if this is a big deal breaker for you, then definitely check out the Soundpeats h1, which I reviewed recently. The Soundpeats H1‘s have managed to eliminate white noise entirely while at the exact same price point.

The soundstage was very similar across all three buds again, all punching well above their price point.

But with audio hiss aside, the Fill T1 Pros most definitely come out on top in terms of overall clarity

But not by an enormous margin there if we’re ignoring all of the background static.

So the big question of which buds are the best of the three that you should buy is pretty evident by now.

To be honest, I don’t know why I’m hyping up the FIIL T1 pros won almost every single round, making them the king of fiil’s budget true wireless earbuds 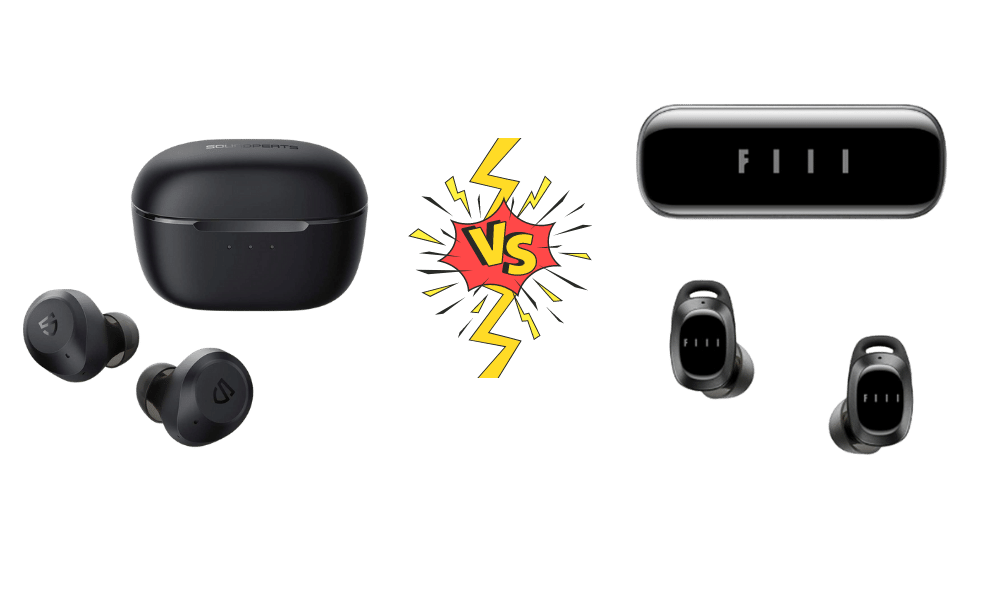 Compared to the strong mids and highs of the FIIl T1 Pro, Soundpeats falls bit short.

But when it comes to the Active Noise Canceling performance of both the earbuds Soundpeats T2 beats the Fiil T1 Pro where Fiil lacks in quality ANC performance. Despite the poor performance, I prefer the Fiil T1 Pro for the sounding by a small margin but availability is a question here.