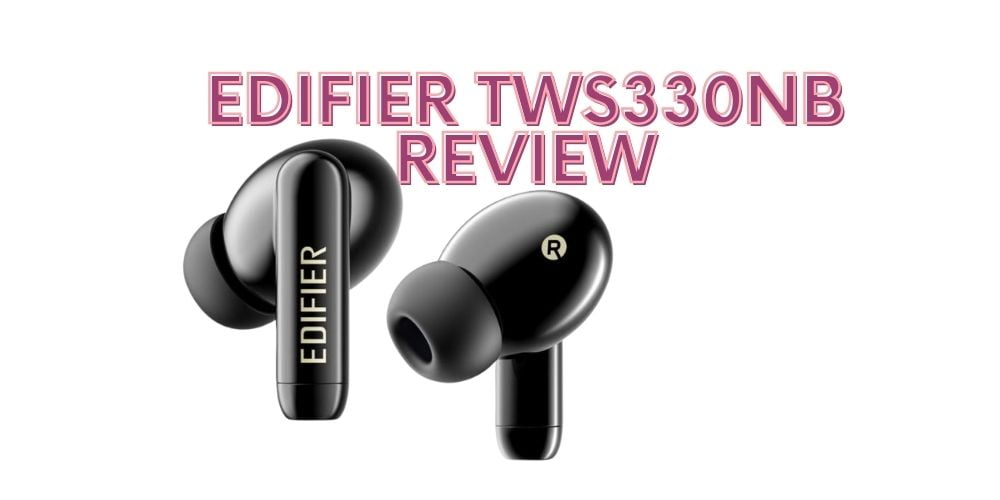 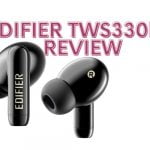 The key to winning consumer trust is addressing specific pain points and listening to their customers. Edifier has done precisely that in making their earbuds better, and we have seen them make many great earbuds even better through product upgrades. We’re looking at an improvement to the recently launched Edifier TWS300NB and seeing if this upgrade makes any sense.

Let’s get on with the review of the Edifier TWS330NBNB. The 330NBnb is the direct successor to the Edifier 300NBnb, and it’s priced exactly the same as the 300NBNB

The Edifier 330NBNB has a slightly different design, but they are all designed as airpod pro style earbuds but if I do give them special touches to make them look different.

The plastic on the 330NBNB is very nice and glossy and I would recommend getting the white over the black simply because it hides scratches better.

And there’s no wording design in the front of the case only an led light. Below the case you see a button for you to check the battery of the case.

Below the case you also get a Type-c charging port and plugging that in the led at the front will light up to indicate it’s charging and the led also lets you tell the battery percentage of the case.

Battery LED’s if it lights up in white battery is 3 out of 3 Bar, Pink means 2 out of 3 and Red means 1 out of 3 and also similar to the 300NB mb the lid is also a very satisfying execution here because edifier puts in a very nice weighted hinge to snap the lid up in place and hold it there.

Which gives the case a very premium feel overall and if you compared both of these ear buds you can see that this time they’re designed differently and it doesn’t resemble the AirPods Pro so much.

It’s shaped now as more of a traditional stem style earbuds and you can see that inside the case itself the 300NBNB and the 330NBNB looks very different and the stem of the 330NBnb is a lot shorter than the airpods pro style 300NBNB.

The Edifier logo is now on the stem itself and it still uses a touch sensor at the top here for you to control your earbuds.

The Edifier 330NBNB doesn’t have vents on the stem this time which changes the characteristics of the sound signature will check the difference in the Sound Qualtiy Sectiion below.

If you flip it to the front there’s nothing much you only get the left and right indicator and some vents at the top here for tuning.

The 330NBNB is exactly same as the 300NBNB’s so just to run through it you’ll be getting the same bluetooth 5.0 chipset here with support for AAC and SBC audio codec. You’ll also be getting ip54 doesn’t waterproof rating so getting them wet sweaty shouldn’t be much a problem for these earbuds.

The connection on these earbuds is also very seamless so you can use either side independently. Once you connected them and you can swap them in and out from the case and it doesn’t pause the music which is really nice. Lastly, these earbuds don’t support multi-point connectivity

The battery life of the 330NBNB is exactly the same as the 300NBNB where a single charge gives you about 4 hours of playback time with ANC and the case gives you an additional 12 hours of juice without ANC.

It’s slightly better at 5 hours and 15 extra hours with the case and comparing that to edifier ANC earbuds such as the NB2 and NB2 Pro. Those have much better battery life and you can check the review here.

I’m really loving the sound performance of most Edifier earbuds. I think they do a good job with reproducing audio across the entire range. Bass here is good but i do miss the vents in the 300NB because now it doesn’t have the feeling of air escaping the vents when certain bass drop.

The bass here sounds solid and full and overall very sufficient, but these are not your heavy thumping bass hit type of bass. Bass is your are love check Soundpeats T2

Then i think this already 300NB and 330NB are both very good options.

In terms of anc you’ll be getting the same performance as the 300NB with these new earbuds. Since Edifier is known to make pretty good anc earbuds the new 330NB also gets the same treatment and algorithm.

you get the same -38 dB of noise cancellation which works super nicely cutting out low humming constant noises but this allows some high pitch chatters in, with a proper ear tip selected it effectively lowers the volume of chatters quite a bit it’s still audible but perhaps about 20% left.

The ambient mode is also really cool with this earbuds because in the mode you get to adjust the intensity of the ambient mode with six levels of adjustments so it could be very mild to very amplified so it depends on your taste.

To summarize, if Bose manages around 90% of anc effectiveness the Edifier NB2 Pro, Earfun Air Pro, the Apple and Sony all scores about 80%, and the Edifier 330NB scores the same 78% which is similar to the 300NB.

so the edifier connect app works exactly like every other Edifier earbuds. You get to also toggle between anc mode and ambient mode and let you adjust about six levels of ambient sound intensity.

The Edifier TWS330NB makes taking phone calls AND video calls easy. Your voice is clear and even sounds pleasant. A majority of background sounds surrounding the call is left out. However, louder outside sounds and wind can cause the line to crackle.

Latency performance on this is also good with gaming mode turned on. You’ll be enjoying that same 80 ms latency, and of course 80 ms is nowhere near lag-free so if you want that absolutely lack free experience wired headset is still your best bet.

If you like the styling of the Airpods Pro and don’t mind not having the controls mapping save some money and get the 300NB. If you want something different and don’t want to be mistaken for having an Airpods Pro alternative, then the 330NB is for you.

Check on Aliexpress
Our Rating
 4/5